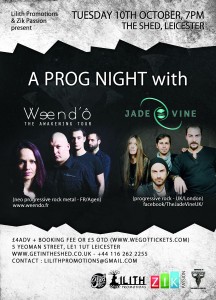 A joint effort between Lilith Promotions and WEEND’Ô bringing you a night of prog at The Shed in Leicester with guest Jade Vine.

They are back with their 2nd album “Time of Awakening” and for the 1st time, they will play in UK with this 2nd album !